As the nights draw in it’s the perfect time to return to some more comfort reads – the literary equivalent of putting on a pair of warm slippers.  Comfort reading is all about the books that evoke special memories or the books we return to time and time again. Today I am joined by best selling novelist and the ‘Queen of Cosy Crime’, Lesley Cookman who picks her top five.

My comfort reads all date from my childhood, as I’ve noticed so many others do.

The first is The Swish Of The Curtain by Pamela Brown. It concerns a group of children who set up their own theatrical company – The Blue Doors. There are follow up books, but it’s the first that tops the list. As a child with a desperate desire to be an actress, this spoke to me in spades, and I can’t remember how many times I read it.

The second is I Capture The Castle by Dodie Smith, given to me at the age of twelve by friends of my parents who belonged to a book club. I got all their cast offs… The first line out-Rebeccas Rebecca in my opinion: “I write this sitting in the kitchen sink…” A journal, written in three different exercise books by a seventeen year old girl. Thoroughly immersive, romantic and inspirational. How many girls started journals as a result of reading this book? I did. I even used Dodie Smith as the subject of a thesis at university.

The third is Three Men in a Boat, by Jerome K Jerome. My father had a copy, which I inherited, and now have two more of my own.  My parents and I used to read passages out loud to one another and end up in paroxisms of laughter. I am delighted to say that my own adult children still do that – from choice! Amazing. Written in 1889, the language is surprisingly modern, and aficionados only have to say “The Cheese!” or “Uncle Podger!” to one another to be lost in helpless mirth.

The final two are both series, from which I can’t single out one book. Monica Edwards’ Romney Marsh series, better known as the Tamsin and Rissa books have a lot to do with my now writing a series about a group of friends. The first I was given was the Summer of the Great Secret, about the Kent Coast, smuggling and –Ponies! That was the other love of my life, although I wrote a lot as well, but that was just something you did, not a great ambition. When I managed to fracture my pelvis two years ago, I re-read the entire series – and, incidentally all the others mentioned here.

And last, the Ngaio Marsh Roderick Alleyn series. My parents had all her books currently published, and between us we bought each new one as it came out. It started off as a familiar theme – the aristocratic detective, a la Albert Campion and Peter Wimsey. But Alleyn soon developed his own distinct personalility, as did his wife, son and sidekicks. And he moved with the times. The rather grating treatment of “the lower classes” was dropped as attitudes changed. The other thing that particularly chimed with me was that Marsh received her “damery” as she called it, for her services to theatre in New Zealand, and several of her books have a theatrical setting, about which she  was incredibly knowledgeable. Marsh is the reason that I now write a mystery series, and I have just re-read her entire canon, beginning to end.

Lesley Cookman writes the Libby Sarjeant Mystery series, and Murder And The Pantomime Cat, a short, is coming out for Christmas 2018. She also writes the Alexandrian series, set in an Edwardian seaside town. 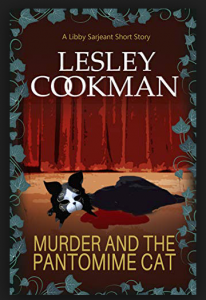 You can find out more about Lesley and her books at http://www.lesleycookman.co.uk