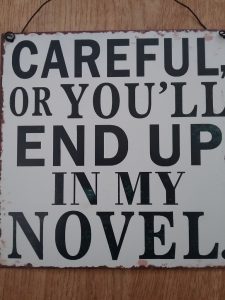 Once news of my book became public I was immediately bombarded with questions from friends, including the inevitable ‘are we in it?’ Of course I would never base any characters on people I’ve met in real life, that’s far too risky – one of the main reasons I’ve never turned my exploits as the only sane woman into LA into a book is because I don’t want to get sued. Seriously, you just can’t lift characters out of the real world and drop them into fiction.

I think most writers are great eavesdroppers, subconsciously soaking up anecdotes and snippets of information for later use. It’s a hazard of the job, and therefore inevitable that certain characteristics or personal mannerisms may well get transferred into the pages of a novel.

My two main protagonists in the Theatre of Dreams, Kitty and Tara, are both theatrical performers.  Kitty is probably very loosely based on my grandmother, a gregarious show off who was singing and entertaining well into her seventies – much to the embarrassment of  her teenage granddaughters! Although my grandmother didn’t have the ‘professional’ stage career she would have loved, she came from the era of the musical hall, part of our British cultural heritage which has gradually been lost (some might say not necessarily a bad thing!), and part of the entertainment industry in which my character Kitty would have thrived.

The common link between Kitty and her younger counterpart Tara, is course their desire to pass on their knowledge and love of performing. Although I never appreciated my grandmother’s talents, my own daughter has inherited her genes; she started dance lessons at the age of four and loved nothing more than putting on a show. She later went on to study at the Royal Academy of Dance and qualified as ballet teacher. They always tell you to write about what you know!
As for the rest of the motley crew who grace the pages of The Theatre of Dreams, well hopefully none of my friends well recognise themselves. The love interest and there has to be one after all, is an architect. Despite what my family tell me, he isn’t deliberately based on the gorgeous George Clarke, he simply evolved from my imagination, but he does share George’s enthusiasm and passion for restoring old buildings – but there the resemblance ends.

One of the underlying themes in The Theatre of Dreams is how repercussions of past trangressions can come back to haunt us and inevitably impact on our future. I’m a panster, as they say in the writing business, not a plotter. I fly by the seat of my pants and let the characters dictate the story. Any similarities to real life events is purely coincidental!
The first post of the new year is inevitably full of resolutions – I’ve done it all before, drink less, exercise more, give up cake and chocolate. This year, no lifestyle resolutions.  Setting unachievable goals only leads to disappointment. I know my weaknesses.   There’s no way I’m going to reach into the fridge to snack on a carrot stick when the Christmas box of Thorntons is sat on the sideboard.

As for the exercise, well that has already been curtailed. My running route is currently flooded thanks to exceptional high tides and Storm Eleanor – although I suppose that’s not really a valid excuse – I do have a gym membership and there is always sea-water swimming….
However, when it comes to setting writing goals, 2017 was a bumper year.  I am living proof of the old adage in the publishing world that you should never give up.
So what challenges is 2018 about to bring?  I’d like to say finishing another novel, but with an extended holiday to Australia and New Zealand fast approaching, I’m nowhere near the stage of starting another novel, let alone finishing one. Travel arrangements require meticulous research; I don’t book anything until I’ve read nearly every single review on Trip Advisor. And as for the packing dilemma of how many clothes to take for six weeks on a weight restriction of 20 kilos….several layers to be worn on the plane is my current thinking. After all, it’s the case that gets weighed, not me.

However, I am at the age when it’s a good idea to generate additional brain cells by learning new things. I’ve just had my first meeting with my publisher to outline what will be required in the coming months and it certainly feels like there will be plenty of opportunities in 2018  to acquire new social media and marketing skills – a slightly daunting prospect for a shy retiring techno-phobe like me, but probably far more achievable than giving up cake…