This fun piece was definitely inspired by watching too much Strictly Come Dancing. 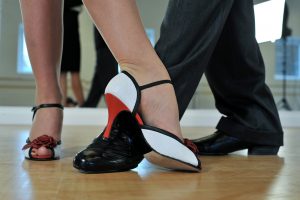 Sunday. I wake up feeling slightly worse for wear. What was I up to last night? I’m sure I had nothing more than a couple of G&Ts at the social club. I groan as it all comes flashing back.

‘Do you dance, Trish?’ John had asked. ‘I need a partner for next Saturday’s competition. Gloria’s gone down with gallstones.’

Ever since John’s wife, Sandy, passed away six months ago I’ve had my eye on him. So, unfortunately, has Gloria. Her gallstones are my golden opportunity or would be if I didn’t have the co-ordination skills of a kangaroo on ice-skates.

I roll out of bed and onto the internet. By mid-day, I’ve ordered three teach-yourself-ballroom dvds with next day delivery. Unfortunately, there’s no drone-drop service on Sundays.

Monday. While I eagerly await the arrival of the morning post, I phone a couple of local dance schools. Tony Wolfe charges forty pounds an hour for private lessons. He is available tomorrow evening.

John drops by to say he’s persuaded Gloria to lend me her costume. ‘Do you think it will fit?’ he asks hopefully. I don’t want to disappoint him. Gloria can’t be much more than a size ten.

John declines my offer of coffee. He’s off to visit Gloria in hospital.  I spy a  bouquet of flowers on the parcel shelf of his Ford Fiesta. He suggests we meet up at his place on Wednesday evening to practice.

Tuesday. I have my first lesson with Tony Wolfe who is slightly more mature than the photo on his website led me to believe. I decide I like him. He’s not bad looking in a sleek, suntanned, silver fox sort of way.

‘I don’t need to win the competition,’ I tell Tony, ‘just finish in a respectable position.’

He winks at me. ‘There’s nothing respectable about you, my dear.’

I’ve no idea what he means.

Wednesday. Tony tells me I’m improving, but I don’t feel quite ready to show off my skills to John. My car will have to break down on the way to his house. If he offers to come and pick me up, I’ll explain I need to remain with my vehicle for the AA man. After that my phone battery will die.

Thursday. During a rather raunchy rumba Tony tells me all about his holiday home in Malaga.  We leave the studio together and he hops into a shiny new Jag.

John phones. He offers to come round to run through our routine. I’ve no idea how I can get out of this one, apart from breaking my ankle.

‘I’ve just had another thought,’ he adds.  ‘Gloria made an appointment for a hair and full make-over on Saturday morning at Cut & Cutz. Why don’t you take it instead? My treat.’

Cut & Cutz is a super expensive salon. It would be ungrateful to break my ankle now. ‘That’s very generous, John,’ I say. ‘Unfortunately, I can’t meet you this evening. I need to get my cat straight to the vet.’

I haven’t kept cats for years.

I had totally forgotten the AA towed my car to a garage the previous day. I’m tying myself up in knots. Fortunately, there’s a vet a couple of streets away.

I don’t answer the phone for the rest of the evening in case it’s John ringing back for news of Tiddles. Euthanasia was the only option. I’m far too upset to talk.

Friday. It’s my last session with Tony. He offers to take me out for a drink.

Saturday. After a week of protein shakes, granola bars, and far too much deceit, I can do up the zip on Gloria’s dress to within half an inch.

John’s expecting me for a quick rehearsal at four. My knock at his door is answered by a feline squeal and then a thud. I peer through the letterbox. John is prostrate on the hallway floor.

‘Bloody creatures,’ he mutters as I phone for an ambulance, ‘they’re always under my feet.’

I’m hurt by his insensitivity. Has he forgotten I’ve just had to have poor Tiddles put to sleep? I promise to let Gloria know about his accident. She can waddle down from the surgical ward to sit with him in A&E.

Sunday. I wake up feeling slightly worse for wear. What was I up to last night? I’m sure I had nothing more than a couple of G&Ts. I smile as it all comes flashing back. The rumba isn’t the only thing Tony Wolfe is remarkably good at for a man of his age. Gloria’s gallstones were my golden opportunity after all.

A version of this story first appeared on www.thepygmygiant.com