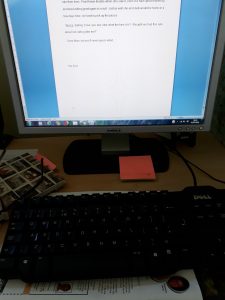 I’ve just typed The End on a first draft of a new novel.

When it comes to writing, I’m  a ‘panster’. I fly by the seat of my pants. I don’t start with a plan – or at least not a rigid, set in stone plan, or even set in a notebook or on a whiteboard plan. I don’t even have post-it notes, although they do come into play later on.

A panster starts off with an idea with in their head, and inevitably finishes up with something completely different on paper.

It could be characters, or just one scene, that ignites the spark.  Once I’ve got my characters, or at least the main protagonist and antagonist, I always know how the story is going to end – it’s just how the characters get there that needs working out.  It’s not until I’m several chapters in that I stop to take stock (or run out of steam).  Then I have to think – is this going anywhere? I might go back at this point, have a bit of a tidy up before deciding whether it’s worth continuing.  The best part of being a panster is when I hit the point where the characters I’ve created start talking to me, telling their own stories. That’s when I know it’s going somewhere – although not necessarily where I would like it go.

The trouble with being a panster is that it involves a lot of  jumping backwards and forwards. As a character takes shape, or a new sub-plot forms, I have to flit back to an earlier part of the manuscript and drop in a few clues. If I were a plotter I’d have dropped the clues in as I was going along in a orderly, organised fashion.  That’s when the post-its come in, by the side of my keyboard. I jot down new ideas as the story evolves, or scribble reminders to go back and insert a reference to a now vital scene.  Add to the chapter-hopping chaos, several mugs of tea, and the occasional glass of wine (I work in the evenings when home alone) and I end a with very cluttered work-space.  That wonderful quote ‘Creative minds are rarely tidy’ could be the family motto.

If I wrote novels that required detailed research, basically I’d come unstuck. I research as a go along. Setting stories in a contemporary time frame in locations I’m familiar with may seem like a cop-out, but the mythical ‘they’ always advise you to write what you know and it does make sense.

I’d like to be able to write every day but inspiration is not always forthcoming and sometimes life just gets in the way.

Having typed those magical words ‘The End’ writers are advised to sit on a first draft for at least a couple of weeks before picking it up again.  A second draft always requires detailed refining, and then there’s the third and the fourth…

First thing this morning I woke up with a brand new scene in my head, yesterday I decided another would work so much better if character A did this, instead of character B. Of course, if I were a plotter I would have known all this right from the start.

Hey ho, back to the keyboard.

One thought on “Flying By The Seat of My Pants”