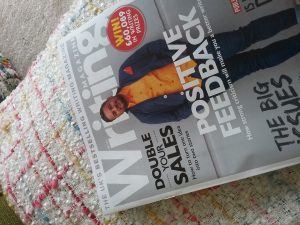 I think it is every writer’s dream to see their name in print. I write because I enjoy it, and I want to publish what I write not for some great ego trip, but because I think other people might enjoy reading it too. I’m an avid reader, I’m never without a book at bedtime, and I write the sort of stories I like to read myself.

I don’t enter  a great deal of writing competitions. I did when I first started out because quite naturally when you first start out you think everything you write is absolutely brilliant. One win in a local competition early on spurred me on to national competitions where the field of competitors increased considerably. After paying for a critique and receiving feedback where the only positive comment was the way I’d laid my story out on the page, I more or less gave up – until earlier this year when I plucked up the courage to submit a couple of short stories to Writing Magazine.

When I began submitting novel number one (which has been re-named and rejected so many times it’s easier just to refer to it as novel number one), I followed all the old advice about starting something new straight away and the idea for the Theatre of Dreams, which had been brewing for some time, just seemed to fall into place.  Second time round, when I began submitting The Theatre of Dreams I had no back-up plan. I didn’t have an idea for a new novel, so I had to think of something else to take my mind off that lengthy wait for aents/publishers to respond (which thanks to Crooked Cat wasn’t such a lengthy wait after all!).

Science Fiction has never been my forte, and I’m not usually up for a challenge, but the theme of ‘Other Worlds’ caught my imagination as did a second competition due in the same month,  on any theme as long as the words  ‘without that everything falls apart’ were used mid-way.

Most writing competitions these days carry an entry fee, which can add up – another reason I’d stopped entering, but as a magazine subscriber one of the stories was free to enter and the other was  discounted. They tell you in the rules that if you don’t hear within two months you haven’t won. Two months down the road I had edits to work on with the Theatre of Dreams, and a new novel idea was starting to take shape. I kept busy.

So, imagine my surprise when I sat down with my lunch the other week, opened up my newly arrived May edition of the magazine to see my name in print! I hadn’t won the ‘Other Worlds’ competition (no surprises there) but beneath the winning entry I was NAMED on the shortlist!  And then I flicked through to the mid-sentence competition, and there I was NAMED AGAIN!!

I know it’s not quite the same as an Oscar nomination, but I’ve waited all those years to appear on a short list and then two come along at once! I’m happy with that. Very happy! 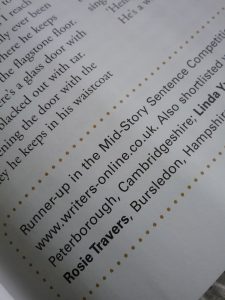 (I will be putting these stories up on this website soon).