I think it’s pretty much taken as read that if you want to be a successful fiction writer, you need to have a vivid, fertile imagination.

You can take inspiration from real-life events, or people, but when it comes to joining the dots – you make it up. The idea for The Theatre of Dreams was born during a walk on a blustery seafront and the discovery of a lost local landmark. Yes, the theatre in my novel was inspired by a real building, but the story itself is purely a figment of my imagination.  Sometimes it doesn’t take much to trigger a burst of creativity.

Last autumn my youngest daughter broke her foot and was incapacitated for a few weeks, so to fend off the boredom we undertook an exercise in triple-generation bonding – sorting out my mum’s photograph collection.    My parents took many cruises – but my dad, especially in his later years, didn’t like getting off the ship although he did like taking photographs. Therefore my mum has been left with several albums full of pictures of docksides. Great if you like a container port, but she and I were both of the opinion that if you’ve seen one container port you’ve seen them all.

The albums were sorted – twenty years of cruise holidays condensed into one ‘highlights’ album and not an industrial crane in sight. But, whilst going through Mum’s photograph collection, I discovered a selection she had inherited from her own parents stuffed into one of those sticky plastic albums that were very popular back in the 1980s.

A couple of weeks ago  I finally got round to retrieving the inherited photos from their sticky plastic grave with the intention of re-posting them into a scrapbook. My mum is  92 years old and prone to bouts of forgetfulness but she had no problem recalling the names of long-lost relatives she hadn’t seen since the 1950s. 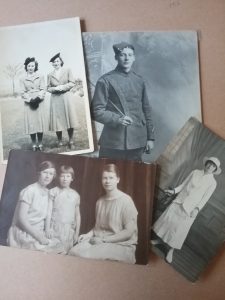 Some of these pictures went further back – to the 1920s and beyond, the era of the austere Edwardian matriarch resplendent in her full-length frock. Wonderful names rolled off my mum’s tongue as she called relatives from her own childhood – who knew I had a great aunts Tizzy and Ahinoam -understandably always known as Inny.

There were pictures of my grandparents as young people– my grandfather added a year onto his age so that he could join up to fight in the First World War and only remembered to take it off again in the 1930s. He looked dashingly handsome in his uniform. How did he meet my grandmother?  It began with a book.  Grandma (Mary) had been fond of another young man of German extraction who had been waltzed off from his Lancashire village into a camp during the First World War never to be seen again. Apparently Mary had lent him a book and he made his friend Bert promise to return the book to Mary, and so Mary and Bert’s romance began, but meanwhile Bert’s step-mother was also trying to hook Bert up with her own daughter – an actress.

If these pictures could talk they might tell a different story – events might not have happened quite like that, or necessarily in that order, but it doesn’t take much to ignite a spark.  These sepia people might well have kept my mum  occupied for a happy afternoon of reminiscing, but they could provide me with a whole plethora of novel ideas. 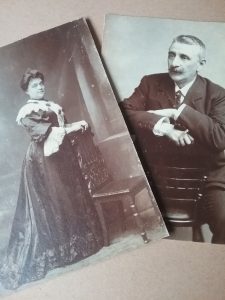 Here are my great-grandparents who met and married in Brazil having both gone out there to work in a cotton mill in the 1870s. How brave were they? And we think our youngsters are pretty adventurous when they set off overseas with their i-phone, travel apps, and return air tickets.

I’ve never felt inspired to write a historical saga before, put off by the mountains of research involved, but I feel there could well be one brewing. Brazil here I come…

And if you want to read about the inspiration behind The Theatre of Dreams, it’s here –  Setting The Scene