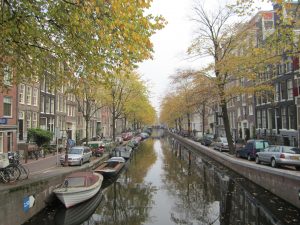 What a difference a year makes. It’s just over twelve months since I moved back to the UK from the Netherlands. I’ve had to adjust, to get used to living in the tranquillity of countryside after three years in of living in busy towns with everything on my doorstep.  I’ve had to rely on a car again. No point having a bicycle in my home village – there’s only one way out of it – uphill. I’ve had to re-establish friendships – oh you’re back again are you? (It wasn’t the first time we’d moved away).

This time last year I was in a huge dilemma about my writing.  Whilst still in Holland I had received a positive response from one of the many publishers I’d sent my first novel to. On my return to the UK we met and they offered me a contract. I should have been over the moon, but I wasn’t…because by this time I’d finished writing The Theatre of Dreams and I liked it an awful lot better than Book 1. The contract I was offered gave the publisher first option on my second book. They already wanted changes to Book 1 to suit their style, and any subsequent books would have to follow a pattern. The Theatre of Dreams would take a fair bit of re-writing to fit the mould. So, what did I do?

I reminded myself how long I’d waited to find a publisher. I wanted to be a published author. Surely I could make the changes, a published e-book (there was no promise of a paperback) was better than no book at all. I could compromise…couldn’t I? Fate works in mysterious ways. I then saw a Twitter post from one of the big publishing houses requesting one line pitches, and I thought, why not? I was still dithering about the contract, so I submitted a pitch for The Theatre of Dreams – straight away I was asked for the first three chapters and a synopsis.  Although they quickly replied it wasn’t totally what they were looking for, a standard rejection response, they did say they liked my style. It was the kick I was waiting for.

I took a leap of faith.  I wrote to the first publisher and told them I’d changed my mind and I didn’t want to go ahead with the contract. Of course, I still had to find a publisher for The Theatre of Dreams, and I had to face a few puzzled queries from various quarters (including my other half) of what, you’ve turned a publishing contract down? But within a few months the deed was done. I found Crooked Cat, and now, twelve months on, I don’t just have an e-book ready for publication, I have a paperback. I have a novel that I’m proud of, that was great fun to write, and hopefully great fun to read.

Sometimes you do just have to trust your instincts. Book 1 has been well and truly consigned to a locked drawer and here’s me grinning away with the treasured first copy of The Theatre of Dreams 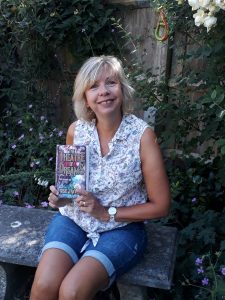 And as for adjusting to life back in the UK, yes there are still things I miss about the Netherlands, especially this – appelgebak met slagroom, but as I no longer consume vast quantities of calorie-laden Dutch delicacies, I don’t feel quite so bad about giving up the bike! 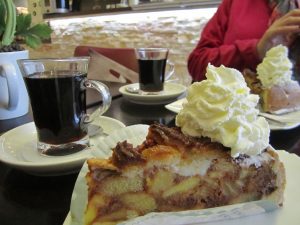 3 thoughts on “What A Difference A Year Makes”