Today on my blog it’s a first – a guest post! I am delighted to welcome fellow author Jennifer C Wilson to talk about her new book in the historical Kindred Spirits series. 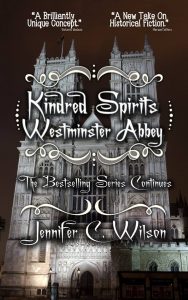 In the Kindred Spirits series, we meet the ghosts of historical characters, in a range of contemporary settings. Have you ever wondered what Richard III and Anne Boleyn might have in common, what Mary, Queen of Scots is getting up to now, or what happens when the visitors leave some of the most popular attractions in the country? Well, here’s your chance!

In the third of the Kindred Spirits series, we visit Westminster Abbey, and I hope you enjoy meeting a new community of ghosts. Mind, with modern travel so easy these days, a few faces we’ve already encountered might just show up too…

With over three thousand burials and memorials, including seventeen monarchs, life for the ghostly community of Westminster Abbey was never going to be a quiet one. Add in some fiery Tudor tempers, and several centuries-old feuds, and things can only go one way: chaotic.

Against the backdrop of England’s most important church, though, it isn’t all tempers and tantrums. Poets’ Corner hosts poetry battles and writing workshops, and close friendships form across the ages.

With the arrival of Mary Queen of Scots, however, battle ensues. Will Queens Mary I and Elizabeth I ever find their common ground, and lasting peace?

The bestselling Kindred Spirits series continues within the ancient walls of Westminster Abbey.

Praise for the Kindred Spirits series

“A light hearted, humorous, and at times tender read which you’ll enjoy whether you like history or not.”

“This light-hearted, imaginative read is a new take on historical fiction but make no mistake, this is not only a fun read but an educational tool.”

“A brilliantly unique idea from a distinctive new voice in fiction.” 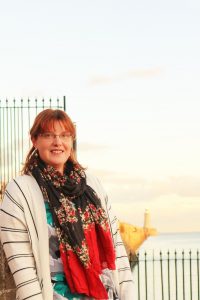 Jennifer is a marine biologist by training, who developed an equal passion for history whilst stalking Mary, Queen of Scots of childhood holidays (she since moved on to Richard III). She completed her BSc and MSc at the University of Hull, and has worked as a marine environmental consultant since graduating.

Enrolling on an adult education workshop on her return to the north-east reignited Jennifer’s pastime of creative writing, and she has been filling notebooks ever since. In 2014, Jennifer won the Story Tyne short story competition, and also continues to work on developing her poetic voice, reading at a number of events, and with several pieces available online. Her Kindred Spirits novels are published by Crooked Cat Books and available via Amazon, along with her self-published timeslip novella, The Last Plantagenet? She can be found online at her blog, and on Facebook, Twitter and Instagram.