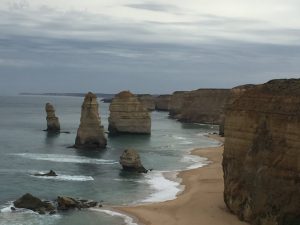 I could just let the pictures do the talking but I’m not sure they do the landscape justice. So far our road trip through the wide sweeping beaches of NSW and along the Great Ocean Road in Victoria and over the sea in Tasmania has lived up to all our expectations. And talking of taking pictures, there are a great many viewpoints on the GOR and a great many views. I can hop out of the car, admire the view and take a few snaps to bore the folks back home. I don’t understand why anyone needs sixty selfies  standing in front of said view, but apparently they do. I don’t get it – at the Twelve Apostles, probably the highlight of the GOR and viewing platforms organised on a Stonehenge-like scale, it really was elbows at the ready to see the Apostles (sea stacks – yet more O level Geography coming back to haunt me), let alone capture a photo of them without the added extra of a happy-smiley Chinese tourist. 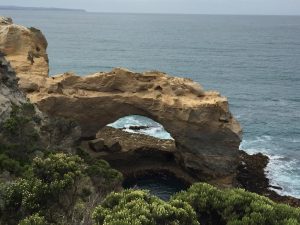 But it’s not all about the scenery, its also about the wildlife. I now know that kangeroos are pretty common place, and I have actually stopped taking photos of them, but I did get very excited spotting that first one, and my first Joey. 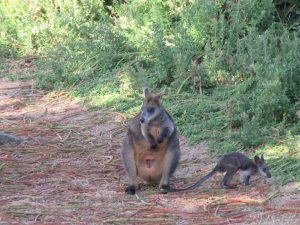 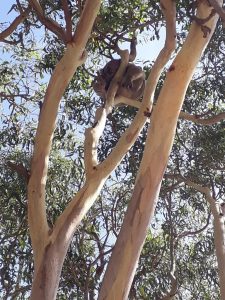 Add to the list those sleepy koalas, friendly seals, a stingray at least a metre across, a whole menagerie of exotic birds, and now, in Tasmania, the local devils, wombats and  fairy penguins, and our trip is in danger of turning into antipodean Springwatch – although its actually autumn here. That’s something we hadn’t thought too much about – I just assumed Australia is hot therefore the holiday season lasts all year round. No it doesn’t. We have stayed in some places that are pretty deserted, cafes have closed up and business is over for the year.

Australia is a big country and out of the main cities it seems pretty empty. We’ve driven (or rather Mr T has driven) many miles from Sydney to the picturesque town of Port Fairy before looping back to Melbourne for our flight to Tazzie. We plotted our route at relative random but booked our accommodation before leaving the UK. We’ve been pretty lucky so far, staying in an eclectic mix of accommodation (including a quirky attic room in a pub with hens in the garden and knitted tea cosies on the breakfast table – not quite sure Mr T used to the luxury of corporate travel  has forgiven me for that one!). Embracing small town Australia has been a bit of culture shock – as in New Zealand we quickly learned that what passes for a town here, is very much on the scale of what we’d refer to in the UK as a village. I am impressed by the ready availability of public toilets (these things are important at our age), picnic areas,  playgrounds and bbq facilities, in even the smllest of communities.

Mr T and I hsve become adept speed tourists. With such vast amounts of ground to cover, we’ve had to cherry-pick but boxes are being ticked off.  If I am honest the novelty of living out of a suitcase is starting to wear off, and yes I could have got away with bringing less!

What’s that you say said, Skippy? Oh go on then, just one more photograph! 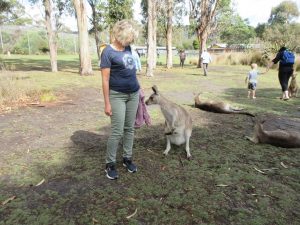