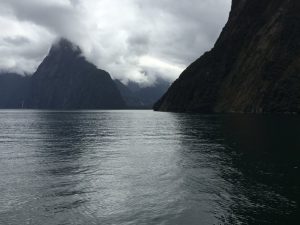 I’ve already decided my next book is going to be entitled Back on the Bus – an entertaining tale of one bus; fourteen days and forty people. Add in some stunning locations (I might have to work on my adjectives – how many times can I use stunning in one sentence?), a perfectly matched tour-guide-driver comedy duo, et voila, the next best-seller.

We were on a hectic schedule. No lazy lie-ins for us. There was a whole country out there to see and thanks to our wonderful tour guide Laurel, a walking-talking New Zealand encyclopaedia, we learned all about Maori folklore alongside a  catalogue of NZ’s more recent history. The Maoris have an explanation for every feature on the landscape, every lake, every mountain is a legend embedded into their history. We learned too about the early European settlers, the farmers who were promised pasture but discovered a land covered in forests of deep bush, and the pioneers, determined to conquered unchartered territory and carve their way through rugged mountain passes from coast to coast.

New Zealand is a fascinating country. It not only looks beautiful but its people are welcoming and share a stoic sense of resilience and a great sense of humour. In our second week we travelled from Wellington on North Island to Christchurch in the south before heading inland and across The Southern Alps. We spent a couple of days in the adrenalin hotspot of Queenstown.  Youngsters from all around the world congregate here to ski and snowboard in the winter and bungy Jump and white water raft in the summer. We took a jet boat ride on the Shotover river which seemed pretty adventurous for us but probably quite tame by Queenstown standards. We travelled across vast plains and through mountain passes to the eerie wilderness of Milford Sound, we headed further south still to Dunedin before heading north again to spend our last night overlooking the majestic shores of Lake Takepo before moving back to Christchurch, which six years on is still reeling from the devastating earthquake of 2011.

We saw the weird and the wonderful – from the natural landscape of the Moeraki boulders to the Victorian melodrama of Oamorua, now a mecca fot steampunk fans everywhere and where incidentally our bus broke down…. 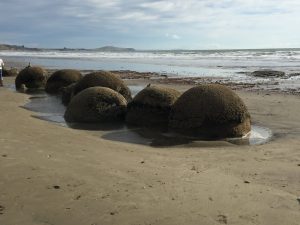 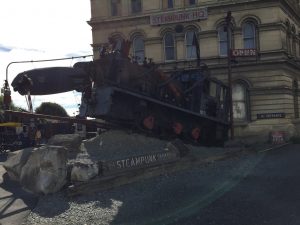 As for the weather well Four Seasons in One Day is an understatement, jackets were on, then off; raincoats are a must but then so are sunglasses. NZ really is all its cracked up to be, and as for that bus, and those forty people well I admit we did start off in great trepidation but having covered 1800 miles in two weeks we bonded!  We made new friends and had great fun, and it now seems quite daunting to be setting off to Australia on our own…. 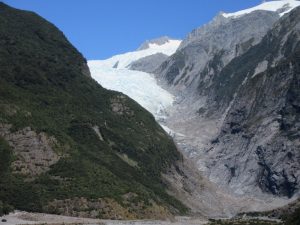