Further to my post a couple of weeks’ back, here, as promised is my shortlisted sci-fi story from Writing Magazine. I have to admit sci-fi would never be my chosen genre to read, or to write, but that’s the wonder of writing competition prompts, they can take you off into another world! 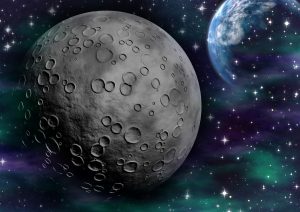 Voyage into the Unknown

There were reports of riots in the emigration lines. Brad said it wasn’t worth taking the risk. We’d left it too late anyway. A family who’d been waiting two weeks were turned back when they reached the departure gate because one of the children was sick. The next day the family reappeared minus one. Rumour had it the father had sacrificed the poorly child to ensure the others’ safe passage. That’s how desperate people were.

We’d been on emergency rations for the last six months. There was no hope of replenishing supplies. Even the black market had dried up. We’d been forewarned this would happen. Back in my parents’ day prophets had predicted a catastrophe on a global scale. The politicians had taken no notice. The wheels of industry would not be stopped. When one resource became depleted, another was harnessed. Technological advances sucked the goodness from the soil, the sea and from the atmosphere.

The oceans had dried up; the earth was parched and barren, vegetation and livestock dead. Only the very elderly could remember the days of fresh food. As a child I’d been repulsed by my grandfather’s salivating lips as he described the taste and texture of cooked meat. I couldn’t imagine consuming anything that hadn’t been cultivated in a petri-dish, but even laboratory manufactured foodstuffs needed water.  We’d been too greedy. Our planet could no longer sustain life.

There had been a cull to reduce the population. I’m surprised the family with the sick child made it through the rigorous screening process.  The majority of diseases had been eradicated. Medicine was one area in which scientists excelled. Cures existed for all but the rarest of cancers, and for those incurable conditions, euthanasia was encouraged.  As a race we were supposedly the fittest and strongest we’d ever been. We just hadn’t developed a way of adjusting our lungs to cope with the polluted air that smothered our planet. A few more years of research and we might have conquered it.

Brad had worked on some of the initial investigations into the sustainability of the satellite colonies. In theory, we should have been first in line for one of the emigration ships but it seemed such a drastic step. If we could survive a few months, I was convinced the rains would come. There had been droughts before – the longest on record was five years.  We were currently in our seventh.

Old fashioned words such as frugality, restraint and recycling were being bandied about by the told-you-so brigade; those smug academics who took great delight in witnessing the planet’s demise. They would stay to the bitter end, whatever. They stood chanting on street corners in ethereal white gowns, although we all wore white by then, to reflect the brutal heat of the sun.

Brad said there was talk of a new exploratory space expedition. ‘We know there are other solar systems out there,’ he said. ‘We know there is another planet just like ours.’

Sometimes I took the snippets of information Brad brought home from work with a pinch of salt. He liked to tease me with sound-bites picked up eavesdropping on his superior’s conversations. However, there was something about his manner that made me think this time he genuinely knew more than he was letting on.

I made discreet enquiries amongst our friends, or at least the small group of acquaintances we had left. You couldn’t blame those who had already chosen to evacuate.

‘What do you want to leave for?’ Our neighbour Meritt asked. ‘We were expecting you guys to host our end of the world party.’ Our apartment was double the size of Meritt’s, one of the advantages of working for the Space Agency.  Merrit had stockpiled alcohol and now lived on a diet of home-brewed Vapour Juice. Vapour Juice had been outlawed long ago. It had become too precious a commodity to be left in the public domain. Battery packs could run on Vapour Juice.

‘As far as I see it, you have two clear choices,’ my cousin, Rico, said. Rico was a chemist who had devised a best-selling over the counter euthanasia pill. ‘You stay until the bitter end and swallow one of my little smarties, or you take the risk and head off into the unknown. Either way you’re going to die. Do it now, or do it later.’

He offered me a couple of his pills at a knock-down price and I told Brad to find out more about the expedition. It turned out I was right. Brad knew an awful lot more than he’d first divulged.

‘I didn’t want you to get too excited,’ he said, ‘in case I failed the vetting procedure. I’ve applied to be the onboard technician. We’d get co-habitee status. This could be our chance to escape.’

Escape to where? The more Brad talked about light years of space travel, of algorithms of probability and worse case scenarios, the less I listened. It could well be this talk of a planet, so similar in make-up to ours, was nothing but a myth. Why would anyone sign up for a once in a lifetime jaunt to nowhere?

As the days went on, the idea became more of a reality. News began to filter back from the satellite stations. There were food shortages and fighting amongst the immigrants.  Security personnel were losing control.

Brad confirmed the rumours. ‘They’ll last six months at the most,’ he said, his face grim. Everyone was grim these days, apart from those like Merrit who were comatose. ‘The satellites will never sustain permanent settlement. We knew that all along.’

I thought of the father who had abandoned his sick child only to lead the others to death on a remote space station.  No wonder the immigrants were up in arms.

Brad said there had already been a reconnaissance mission to seek out the new planet. It had all been kept under-wraps because communication with the exploratory ships had been lost. However, the task-force crew had been fitted with embedded transmitters which sent signals processed from their thoughts. I didn’t know such technology existed, but Brad assured me it did, although it was still very much in its infancy. Experts were working around the clock to decipher the readings which were still being received.

‘We’ll have to be induced into an advanced state of stasis,’ Brad explained. ‘It’s the only way to travel for so far and for so long. An electrical surcharge will be programmed to wake us when we reach our designated orbit.’

‘And you are convinced this planet really exists?’ I asked.

‘I’m convinced it’s worth taking the risk,’ he replied.

So we set off, a crew of ten adventurers; a mixed bag of technicians and scientists, including Brad’s colleague, Jarvis, a communications expert. We each shared the conviction that doing something was better than doing nothing, although being in stasis was hardly a pro-active state.

We woke as we broke through atmospheric layers charged with meteor debris and radioactive gases. I stared in amazement out of the narrow cockpit window. There beneath us was the mythical planet, as blue as ours had once been.

‘Recognise those white swirls?’ Brad said, his green eyes ablaze with excitement. ‘Remember them? Clouds.  Not full of toxic waste and chemicals, but water. There’s a whole eco-system down there. We can start from the beginning, and this time, we can do it right.’

‘What if life here already exists?’ I asked. ‘Do you think we’ll be made welcome?’

Brad smiled. ‘We’re a party of ten refugees, hardly an invasion force. In any case, this planet is new compared to ours. Whatever life-form exists, it won’t be very advanced.’

We landed in a desert, so similar in appearance to the dying landscape we’d left behind I momentarily wondered if the vivid blue ocean we’d witnessed from above was nothing but an optical illusion. But then the life-forms approached, sitting astride mechanical vehicles.

‘What do they look like?’ Jarvis asked, joining us in the cockpit. He craned his stubby neck to peer over my shoulder.

It was impossible to tell whether we shared any characteristics apart from the obvious four limbs and upright stature. ‘Tall,’ I replied, watching the aliens dismount. ‘Bubble heads.  I think they’re wearing some sort of protective breathing suits. Maybe the air isn’t as fresh as we think. Perhaps this planet isn’t habitable after all.’

Brad frowned. ‘I’m sure these co-ordinates correlate with the landing site of the exploratory vessels. Jarvis, are the transmitters up and running? Can you check the external probes?’

The communication network had been spewing out light years’ of technical information since we broke orbit.

‘Oh it’s habitable all right,’ Jarvis replied, studying his network screen and scratching his bald head. ‘At least for now, but there appears to have been some sort of terrible mistake.’

A message from the Space Agency had come through just hours after we slipped into stasis. The code-breakers had at last unscrambled the garbled thought processes from the task-force crew. The order had been very specific.

‘Mission to be aborted. Change course immediately and head to nearest satellite colony. Do not proceed to planet known as Earth. Dominant species hostile and aggressive. Repeat. Abort mission.’

We discovered too late what had happened to that earlier delegation. As the aliens marched us to their headquarters we saw the task-force vessels moored in a vast warehouse, and we found the crew, or at least parts of them, dissected on the aliens’ operating slabs. We tried to tell them, those tall, small-headed creatures (the breathing bubbles were apparently just to avoid contamination – as if we would contaminate anybody) about the climatic disaster that had obliterated our own planet, but they either didn’t understand, despite Jarvis’ attempts at translation, or they simply didn’t want to know.

I knew I should have stayed at home and drunk myself stupid on Vapour Juice. It would have been a far more pleasant way to end it all. 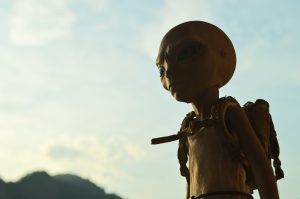 You can check out my flash fiction web page here