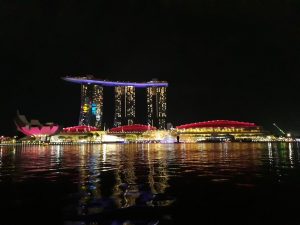 Our ‘grand tour’ has been many months in the planning. A six week sabbatical exploring Australia and New Zealand, our very own journey of dreams. First stop, Singapore; our chance to acclimate and recuperate. Jet lag is a horrible thing, always worse, west to east. A Singapore Sling seemed the perfect tonic, but the old Colonial institution of Raffles was closed for reburbishment, so instead we found Happy Hour on vibrant Clarks Quay, where we learned about the city’s history as an important colonial trading place, and marvelled at the light show at Marina Bay on a night boat trip. Singapore is a real mix of east meets west, great if you love shopping with a myriad of waterproof, air-conditioned malls, but I’m not a shopper. Instead Mr T and I took ourselves off on a clinically clean metro to the Gardens of the Bay, an impressive but Disneyesque ornamental display of horticulture, including giant fake trees and waterfalls, all growing  in a totally unnatural and alien environment. 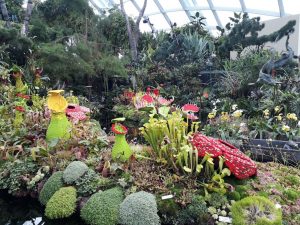 The next day we headed for the real botanic gardens, a UNESCO world heritage site, and a genuine oasis in the midst of a modern high rise city. I liked Singapore, but its hot and humid atmosphere left me feeling like a damp rag. No point unpacking the hair straighteners here, but an umbrella is essential. 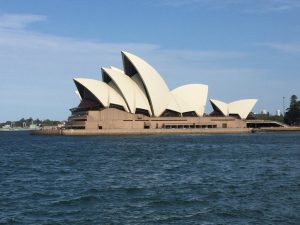 Sydney, on the other hand was a completely different kettle of fish. We arrived early in the morning following an overnight flight with the added benefit of an unexpected upgrade.  We dumped our bags at our hotel then headed straight for the harbour front and joined a tour of the Opera House, spotting cockatoos, ibises, and even a pair of kookaburras in the gardens en route. Recently Sydney has  experienced record breaking temperatures but we soon stopped all that. On our second day we met up with old friends who emigrated 20 years ago. Tbey suggested a trip out to the Blue Mountains and the clouds came down and temperatures plummeted. The thing about the Blue Mountains is the views – but there were no views, only a thick layer of white mist that increased the higher we ascended. We could hear  the cascading waterfalls, but we couldn’t see them. If I’d paid my 140 aussie dollars for an organised tour I might have felt pretty miffed, but fortunately I hadn’t. We had years of catching up to do as we dangled over the shrouded rain forest of the Jamieson Valley in a cable car and took a couple of rides on the world’s steepest railway – an earlier foreruuner of a theme park roller coaster but in fact an old mining track – at Katoomba Scenic World. Incidentally Katoomba Scenic World is also the proud user of environmentally friendly ‘who gives a crap’ toilet rolls according to signs in all the loos. Australia is not a place for the faint hearted.

We ended our mini-break in Sydney as we began – back at the Opera House for dinner. In between we took a boat across the harbour to the surfer’s paradise of Manly Beach and we walked across the bridge – you can climb it for about 300 dollars but you can walk over it with the same views for free. Plus I’d already faced my fear of heights in the cable car. I didn’t feel the need to do it twice.

Our grand tour has been planned with meticulous precision, and although six weeks might seem like a long time, there’s a lot to fit in. It’s speed dating tourism – flirting with several cities in a very short space of time.  Singapore might be fun for a bit of a fling, but Sydney is the one I want to see for a second date. 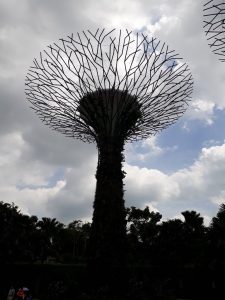 A fake tree in Singapore or the Blue Mountains National Park – complete with its magical mist – you choose! 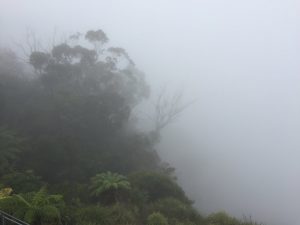 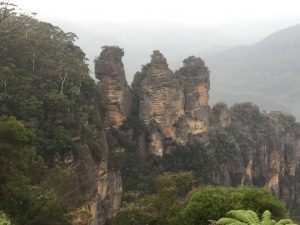