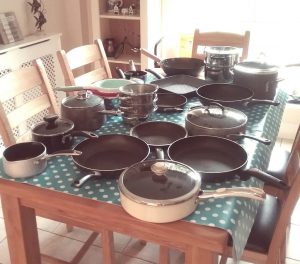 Right now, life is definitely getting in the way of my art – there’s just too much nitty gritty stuff going on to focus on penning the next best seller. It’s just as well book one has been set aside as something to come back to later, and book two, my WIP, is currently out with a friend-of-a-friend for critique. The natural impasse has been filled not with fresh ideas for the new cast of characters currently taking shape in my head (I’m a pantser not a plotter so the characters always come first) but by a daughter with a broken foot and a frantic life-laundry style clearance of the family home ready to receive an apartment’s worth of furniture and household belongings back from overseas.

I’ve moved house more times than I care to remember over the last decade; to be brutal; eight house moves in as many years. So I should be a pro. When I’m in charge, it’s relatively simple. I pack, I label a box, it’s methodical and logical. With an international work sponsored re-location, such as our official return from the Netherlands which finally took place last week, an agency is put in charge.
I know from past experience that international packers are extra vigilant and over enthusiastic, but not necessarily logical.  Nothing escapes their grasp – we arrived in the Netherlands complete with the copy of the local council bin collection rota I’d stuck inside a kitchen cupboard for the tenants who were moving into our old house. And although I am very grateful for the care taken over my belongings, Tupperware is pretty sturdy.  I’ve wrapped pass-the-parcel presents for parties of twenty excited pre-schoolers in less layers.
Why wouldn’t you pack the shelves from the kitchen dresser in with the bed? Lost a flower pot? Look in the linen basket, where else? Unpacking when you haven’t packed is like Christmas Day but nowhere near as exciting. Oh look, a cheese-grater, just what I always wanted. Actually, I already have one, which of  course leads to the dilemma of which cheese-grater to keep and which to let go. Maintaining the equivalent of two households over the last eight years has resulted in a great deal of duplication.

Ignoring the lack of cupboard space, I’ve only got a four ring hob. Even with my faltering mathematical skills I know that the maximum number of pans I can use at any one time is four. So I don’t really need fourteen. Likewise I only have three beds. Six duvets and twelve covers does seem somewhat excessive. I’m actually writing this post as I wait for the local charity shop to open.

I know I don’t have to sort it all out now but I’m becoming impatient. When those new characters start shouting out their stories I don’t want their voices swamped under a blanket of unwanted bedding. I’ll need to get back to work, and a ‘pan-demic’ of cooking utensils won’t aid the creative process at all.